Posted on September 12, 2016 by Alice Delbosque 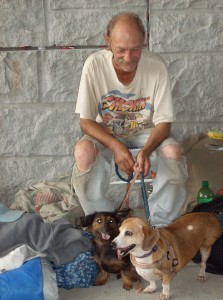 Phil, Daisy and Bones and their story of becoming homeless.

This is why we need your help to continue our mission!!! Please make a donation to Angel Hearts. http://angelheartsrescue.org/donate/ or mail your donation to 7833 Wornall, Kansas City, Missouri 64114

In the last few months we had puppies with Parvo, Heartworms, upper respiratory, along with dogs and cats needing to be altered and vaccinated.

Phil was laid off, then lost his car and then was evicted from his home.
Phil, Daisy and Bones were living under a bridge not knowing what he was going to do. He has no family only his two dogs. He had no money for food. Phil found himself digging through trash from a local restaurant looking for food to feed his dogs and himself.
Phil knew he needed to continue to look for a job but he did not know what to do with his dogs. Almost losing hope he saw that people cared. Fireman stopped off and brought him food for him and his dogs. People dropped off water and food from a family cook out. Marlan with Spay & Neuter stopped and gave him stuff for his dogs. Marlan told us about him and his two dogs. Phil would not part with Daisy and Bones until a person with Restart stopped and got him in contact a person that help Veterans like Phil.
We picked up Daisy and Bones last night and they will stay in our program until he can find a place for him and his two dogs. It was sad for me to see him say good bye to Daisy and Bones and trust that we would not take them away from him and keep them safe. They will need to get current on vaccinations and a check up.